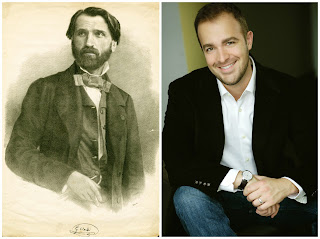 The Verdi Requiem, one of the greatest works of the Italian repertory will get its first ever performance in Florence on Sunday, May 17th.

Florence, South Carolina that is, not Florence, Italy. For the record, the Requiem, which premiered on May 22, 1874 at the San Marco Church in Milan, was performed in Florence, Italy the following year, as well as throughout most of Europe.

The Florence, South Carolina premiere will feature bass-barihunk Evan Boyer and the Masterworks Choir along with tenor Robert Watson, mezzo-soprano Katherine Pracht and soprano Huanhuan Ma.
The concert will take place at the Francis Marion University and is free to the public. The 80-voice choir is led by Dr. William Carswell, associate professor of music at Coker College.

Evan Boyer began the current season with Seattle Opera as Masetto in Don Giovanni. He sang Mozart’s Requiem with the Houston and Dallas Symphony Orchestras, followed by Händel’s Messiah with the Jacksonville Symphony. This summer he will sing Ramfis in Verdi's Aida and the Bonze in Puccini's Madama Butterfly at Wolf Trap Opera.