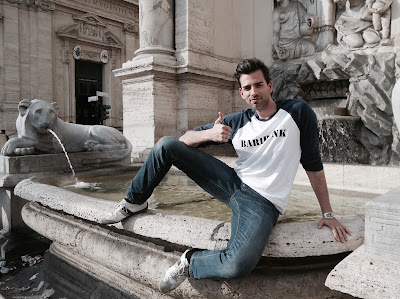 Italian barihunk Vittorio Prato is at the Rome Opera singing the Count in Mozart's Le nozze di Figaro opposite fellow barihunks Markus Werba and Thomas Tatzl, who are rotating the role. Prato has two performances remaining. On May 29th, he'll perform with Tatzl along with Donata D'Annunzio Lombardi as the Countess, Anna Kasyan as Sussanna and Raffaela Lupinacci as Cherubino. On June 3rd, he'll join Werba in a cast with Eleonara Buratto as the Countess, Rosa Feola as Susanna and Michaela Selinger as Cherubino. Tickets and additional cast information is available online.

Prato also took some time out to pose in a barihunk tee shirt alongside one of Rome's 2,000 fountains. Prato is featured in this year's Viva, Italia! barihunk's calendar and we hope to have him back for our 2016 edition.

Prato next heads to Firenze where he will perform Figaro in the opera based on the first part of the Pierre Beaumarchais trilogy, Rossini's Il barbiere di Siviglia. Le nozze di Figaro is based on the second part of the Beaumarchais trilogy. Prato will rotate the role with the rising young Korean baritone Julian Kim. Also in the cast is fellow Italian barihunk Luca Dall'Amico. Additional information is available online.
at 12:11 PM