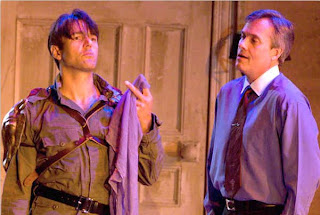 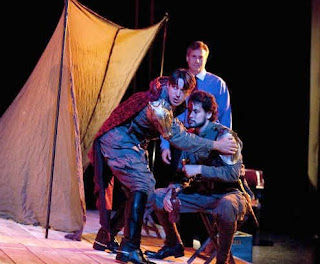 Barihunks waited eagerly for the production of Britten's "The Rape of Lucretia" to open at the Opera Company of Philadelphia. We even promoted it over a year ago when we first heard that Nathan Gunn would play the role of Tarquinius, a favorite at this site. Our excitement and anticipation increased when we learned that the role of Collatinus would be played by emerging barihunk Ben Wager. To top things off, the critical role of the Male Chorus was being played by the hunky William Burden, meaning that the Gunn/Burden partnership was returning that created one of the original barihunk/hunkentenor partnerships when they performed Pearl Fishers together topless.

We have to confess that we were a little disappointed when Phillie took much of the sexiness out of their portrayals dressing them like they were headed to Siberia in winter. We prefer our Rape of Lucretia like this: http://barihunks.blogspot.com/2009/04/some-more-matthew-worthshowing-some.html.

Nonetheless, we can't complain with two barihunks and a hunkentenor on the same stage. Even the Philadelphia Inquirer took note: