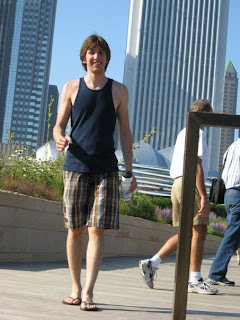 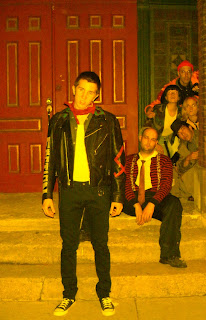 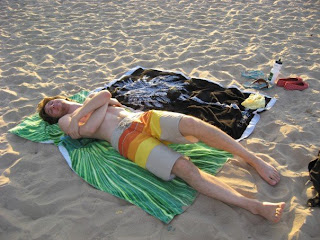 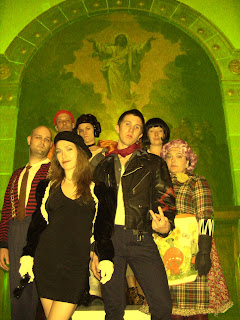 Emerging barihunk Justin Neal Adair is still a student at Chicago's Roosevelt University, but he just landed a lead role in Mark-Anthony Turnage's edgy opera "Greek." This may be the only opera where I've ever seen a warning for offensive language. Apparently, the opera was too much for some more conservative funders who pulled out of their commitments. But the show must go on and it did.

The Chicago Opera Vanguard still has four performance left and you can get more information at: http://www.chicagovanguard.org/www/. Chicago Opera Vanguard was nice enough to send us some pictures of Adair on and off of the stage. If you're tired of the old operatic warhorses then Barihunks encourages anyone in the Chicago area to run out and see this production, which will undoubtedly stir up a heated conversation when the current falls.

And we think that you'll enjoy watching Justin Neal Adair, who we hope to see more of as his career progresses.

Albert Wilson at www.chicagoreader.com has a great description of the opera:

Based on a 1982 play by the controversial English playwright Steven Berkoff, Mark-Anthony Turnage’s 1988 opera Greek transforms Oedipus into Eddy, a leather-jacketed punk from London’s East End, who leaves home after learning of a fortune teller’s prophecy that he’ll have “a bunk-up with his mum.” (“I’d rather go down on Hitler,” he says—a dig at his father, a prole slob who sympathizes with the neo-Nazi National Front.) At a local cafe, Eddy complains about poor service and ends up killing the owner in a fight. Marrying the waitress—the owner’s widow—he takes over the business and becomes a model of bourgeois prosperity.

Breaking with Sophocles, Greek (which I saw in a dress rehearsal) introduces the Sphinx as a character—or rather two characters, played by the actresses who also portray Eddy’s adoptive mother and wife. “Men need killing off before they kill off the world,” cry these hissing, spitting catwomen. “You are the plague—the plague is in you.”

Berkoff delivers an ironic twist ending. Rather than blinding himself and going into exile after learning that his wife is his mother, Eddy embraces his situation. “Yeah, I wanna climb back inside my mum. What’s wrong with that? It’s better than shoving a stick of dynamite up someone’s arse and getting a medal for it!”

In Turnage’s opera (originally commissioned for the first Munich Biennale by avant-garde composer Hans Werner Henze), as in Berkoff’s play, punk rebellion, the anger of unemployed protesters, the racism of far-right fringe groups, and the authoritarianism and militarism of Margaret Thatcher’s Conservative Party are all seen as expressions of the violent, selfish pursuit of power. The scabrous, raunchy libretto—adapted by Turnage and Jonathan Moore—is enhanced by Turnage’s music, which is by turns achingly lyrical and spikily dissonant under Chris Ramaekers’s musical direction. Director Eric Reda’s creatively designed production ranges from outrageous comedy to gripping anguish, and the relationship between Eddy and his wife is genuinely moving—at once passionate and tender, sensual and filial.

The happy couple are played by two splendid young singer-actors, Roosevelt University music students Justin Neal Adair and Caitlin McKechney, who combine emotional honesty with superb technical command of Turnage’s devilishly difficult score. Reda’s conceit is that Greek is being performed by a group of squatters in an old chapel, and he’s found an ideal venue in the Saint Paul Cultural Center, a 19th-century church in Wicker Park. The eight cast members move from the choir loft down the aisles and onto a makeshift stage, while video monitors play footage of soccer matches, marching armies, and street violence. Set designer John Sundling uses scaffolds and soiled drapes to suggest a space that’s been abandoned during renovation—an impression reinforced by the building’s peeling paint and broken stained-glass windows. And gazing down from the front wall, where an altar once stood, is a leftover from the church’s glory days: a mural of the resurrected Jesus, cracked and faded by time and disuse, a perfect image for the play’s view of a society, in which divine will has turned against the animal that is man.