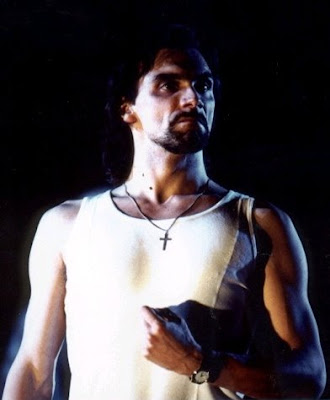 Giovanni Furlanetto is new to Barihunks and came recommended to us by another singer who said "no one is sexier on stage." Well, from the clip of him singing in Le Nozze di Figaro, we'd say that there is a pretty good case to be made. He also looks awfully good in a tee shirt. Teddy Tahu Rhodes may have some competition.

His skills on stage may actually come from the career he had before opera, when he performed as a professional circus and theater actor. [Tenor Rolando Villazon was also trained as a clown].

He first came to the attention of the opera world when he won the 1988 Luciano Pavarotti International Voice Competition in Philadelphia. He has since performed on almost every major stage in Italy, throughout Europe as well as the Santa Fe Opera, San Francisco Opera, Baltimore Opera, Opéra de Montréal and Philadelphia Opera.

Over the last two decades he has become known as a speialist in Mozart, Rossini and Donizetti. We've also added a wonderful clip of him singing some Tosti songs that shouldn't be missed. Clearly, this guy has everything that we love at Barihunks: he can sing, he looks great and he can act.