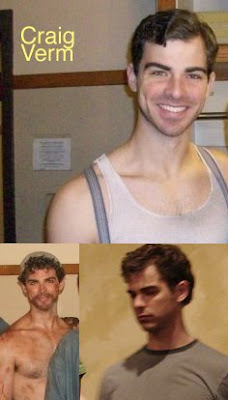 We find it fascinating that barihunk Craig Verm is being cast as Sharpless in Madama Butterfly at the Festival de Belle-Ile in Brittany. If we were Cio-Cio San we'd dump Pinkerton and run off with the American Consul Sharpless. Why put up with a two-timing jerk if this Sharpless walked in?

Verm returns to the United States for a run of La Boheme at the Austin Lyric Opera with fellow barihunk Liam Moran and Jonathan Beyer, who probably deserves to be on this site. For more information, visit http://www.austinlyricopera.org/web/productions_laboheme.asp.

For more hunky pictures of Craig Verm and some background on the singer, view our previous posts here: http://barihunks.blogspot.com/search?q=verm