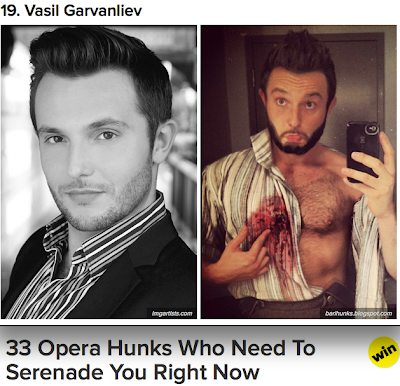 We saw a dramatic uptick in traffic to our site yesterday with a sudden interest in posts from 2009 and 2010. We figured out pretty quickly that we must have been featured somewhere only to learn that we were a prominent part of BuzzFeed's "33 Opera Hunks Who Need To Serenade You Right Now." We have to say that they did a remarkable job of picking out 30+ of the steamiest, sexiest and most talented acoustic singing hunks on the planet.

Do the math and it comes out to 78% baritones. That seems about right in our eyes.

Congratulations guys! Who says that sexy men don't increase the interest in opera? You got the coveted "WIN" button on BuzzFeed.

Also keep your eye out for a Barihunks feature in a major New York publication coming out this week.
at 8:14 AM