Two barihunks are featured in the Edmonton Opera's English language production of Franz Lehár's The Merry Widow at the Northern Alberta Jubilee Auditorium. The operetta opened last night and will be performed again on Tuesday, October 27 and Thursday, October 29.

Michael Nyby sings Danilo Danilowitsch, Hanna Glawari's ex-lover who is less excited about being her lover and sharing in her recently inherited wealth, than most men.  Aaron Durand, who appeared with the company in their Barber of Seville last year, takes on Vicomte Cascada.


Preview of The Merry Widow at Edmonton Opera:

Nyby and lead soprano Sally Dibblee have been tasked with dancing duties as well as singing, as director Brent Krysa and choreographer Dave Ganert have found inspiration in Hollywood dance musicals. Dibblee even took ballroom dancing lessons for the part.

Nyby is a native of Hamilton, Ontario who created the roles of William Dale in Kevin Puts' Silent Night, Brent Colgate in Gregory Vajda's Georgia Bottoms and Demetrio in the US premiere of Kristin Hevner Wyatt's Il Sogno. This season he'll be creating the role of Seth in the Canadian opera Peter-Anthony Togni's Isis and Osiris with Opera in Concert. He'll be joining hunkentenor Karim Sulayman for Händel's Messiah with the Windsor Symphony Orchestra in Ontario on December 7 and 8.


Aaron Durand talks about being an opera singer:

Durand hails from 100 Mile House, British Columbia After graduating from the University of British Columbia in 2012, he joined the Vancouver Opera's Yulanda M. Faris young artist program, performing roles in several mainstage productions including La bohème, The Pirates of Penzance, Albert Herring and Don Giovanni. He was Masetto in the innovative production of #UncleJohn with the Against the Grain Theatre. 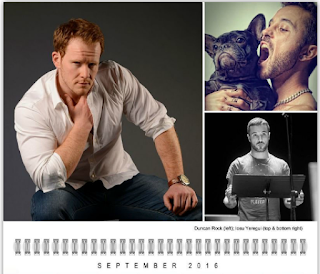