British bass-barihunk Bradley Travis is one of two winners of the 8th Annual Leonard Ingrams Foundation Award, along with soprano Llio Evans. The award honors the memory of Garsington Opera’s founder and is intended to nurture the best young artists involved in the creative process of bringing opera to the stage.

Last year, Travis won the Garsington Opera Helen Clarke Award in recognition of his contribution and musical skill during their 2014 season. He performed a number of small roles in their production of Britten's Death in Venice.

Travis has performed Figaro in Mozart's The Marriage of Figaro with Opera North, as well as a number of roles at the Royal College of Music International Opera School, including Don Iñigo Gomez in Ravel's L’heure espagnole, Lord Ellington Offenbach's La Vie Parisienne and Ottone in Monteverdi's L’incoronazione di Poppea.  Along with Simon Lepper, he made a recording of Ancel Newton’s song cycle Doomed Youth.﻿

From November 14-19, he appears as the Fireman in Voseček's Biedermann and the Arsonists with  Independent Opera. From March 11-May 31,  he performs Masetto in Mozart's Don Giovanni with the English Touring Opera. The performance also features fellow barihunk George Von Bergen in the title role.

MAKE SURE TO ORDER YOUR 2016 BARIHUNKS CALENDAR BEFORE THE HOLIDAY RUSH; 18 OF THE WORLD'S HOTTEST SINGER FROM 9 COUNTRIES. 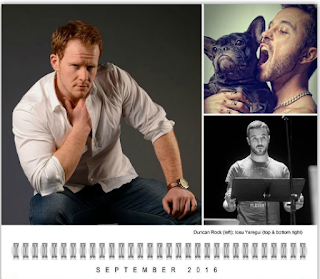