The Boston Lyric Opera kicked off their new season with a production of Puccini's La bohème. The cast features the barihunk trio of Jonathan Beyer as Marcello, Brandon Cedel as Colline and Andrew Garland as Schaunard. Beyer and Cedel are a couple offstage, making one wonder what is really going on in that Parisian garret.

Directed by Rosetta Cucchi, the opera is updated to the 1968 Paris student revolts that reflected generational unrest and supported strikes that brought the city to its knees, this production is influenced by the spirit of defiance embodied in French New Wave films (particularly Jean-Luc Godard’s “Masculin Féminin”) and the mod clothing inspired by London fashion that upended the city’s haute couture reputation.  Boston Lyric Opera's new La Bohème places Puccini’s familiar story of bohemian artists fuled by idealism and passionate love in a graffiti-laden student flat, the revolutionaries’ gathering place Café Momus, and alongside a barricade erected during the student riots.  Audio recordings from the era and from the riots are an integral part of the production’s sound design.

Beyer is returning to the company after having performed Figaro in their 2012 production of Rossini's Il Barbiere di Siviglia. Garland sang Schaunard in the company's 2007 production of La bohème and Cedel is making his company debut. Also in the cast are Jesus Garcia as Rodolfo and the stunning Kelly Kaduce as Mimì.

There are remaining performances on October 4, 7, 9 and 11. Tickets and addition production information is available online.

Our 2016 Barihunks Charity Calendar is now on sale. Order today by clicking below. All proceeds will go to the creation of the Foundation for the Advancement of Baritones (FAB). 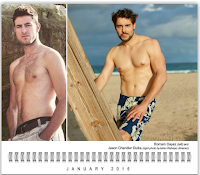