Last month we posted about the Opéra national de Paris' barihunk quartet in Mozart's Don Giovanni, which featured Artur Ruciñski in the title role, Alessio Arduini as Leporello, Fernando Radó as Masetto and Alexander Tsymbalyuk as the Commendatore.

It fairly common to see barihunk trios and, occasionally quartets, in Don Giovanni, but Rossini's Barber of a Seville is a different matter. Leave it to the Opéra national de Paris to assemble three of opera's hottest barihunks for their all-star Barber of a Seville featuring Lawrence Brownlee as Almaviva and Pretty Yende as Rossini. They have brought back Alessio Arduini as Figaro, Ildar Abdrazakov as Basilio and Pietro Di Bianco as Fiorello to fill the low voice roles.

The production opens on February 2 and runs through March 4. Tickets are available online.


Ildar Abdrazakov sings La Calunnia from the Barber of Seville:

Alessio Arduini's current schedule included two roles in Puccini's La bohème, as he takes on Marcello in La bohème in Vienna beginning November 7, 2015 and Schaunard at The Met beginning April 5, 2016. He will rotate Schaunard with two other barihunks, as Alexey Lavrov opens the opera on November 23 and David Pershall takes over on January 6.

Ildar Abdrazakov is currently at The Met singing Henry VIII in Donizetti's Anna Bolena. In December, he'll sing the title role in Verdi's Attila at the Marinsky Theater. 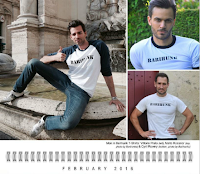