You'll be able to watch two of the most acclaimed barihunks in the world, when they appear together on the big screen in Mozart's Le nozze di Figaro from the Royal Opera House in London. The worldwide broadcast to theaters on October 5th stars Stéphane Degout as Count Almaviva and Erwin Schrott as Figaro. The cast also includes Ellie Dehn as the Countess, Kate Lindsey as Cherubino and Anita Hartig as Susanna. You can find a theater near you HERE.

David McVicar directs the live performance under the baton of conductor Ivor Bolton.

The acclaimed production sets the action in a French château in 1830 on the eve of revolution, amplifying the opera’s undercurrents of class tension. The entire household is drawn into the notoriously complex plot, which covers all shades of human emotion: from spirited playfulness to deep despair but affection and fidelity prevail in this most warm-hearted of operas.

Also, make sure to check out the feature on barihunks in Classic FM, which includes some of the top singers in the world, including Erwin Schrott.

The 2016 Barihunks Charity Calendar is now on sale and available online. For the past four years, the calendar has raised money for young artist programs and young artist projects. Proceeds from this year's calendar will fund the creation of the Foundation for the Advancement of Baritones (FAB), which will fund baritone and bass cash prizes at song competitions, commission music for baritones and basses, and be used to fund other projects featuring low male voices. 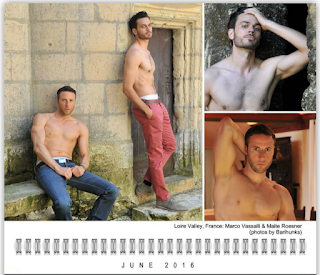