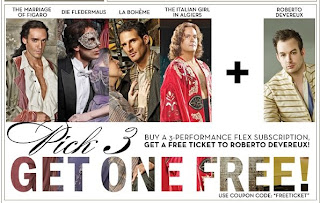 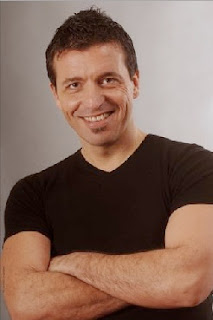 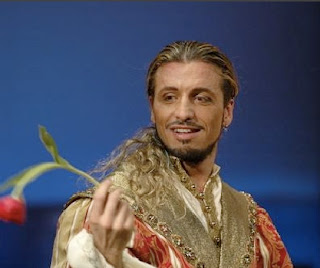 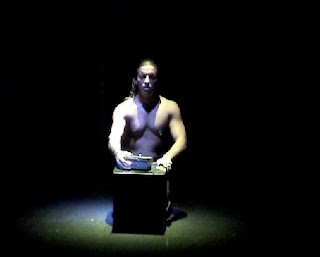 As a follow up to our June post about the Dallas Opera using barihunk Michael Todd Simpson to promote their Marriage of Figaro, it is encouraging to see that they are using divos to promote their entire season. Keep in mind that uber-barihunk Daniel Okulitch didn't even make the promo cut! He's playing opposite Simpson in the Marriage of Figaro. Maybe they think that we saw too much of him in The Fly.

Their campaign features hunkentenors as well as barihunks, primarily William Burden and the adorable and talented Stephen Costello. (I still think that Dallas Opera's Roberto Devereux is one of the hottest opera tickets in the country this year. He's singing opposite the amazing Hasmik Papian). If you're traveling to see some great "O" this year, I'd recommend this performance. Check out their entire season at www.dallasopera.org. They are also featuring hunkentenor James Valenti in La Boheme.

Underappreciated barihunk Wolfgang Holzmair is singing in Fledermaus and Paolo Pecchioli is featured in L'Italiana in Algieri. Let's face it, lieder singers get no respect on this site. Pecchioli has been featured on this site before. His signature role is Colline in La Boheme and he doesn't have any barihunk roles in his repertoire, although he's about to star in Giulio Cesare and we're praying for a sassy German director like Willy Decker.

I'm not sure what's going on in Texas, but both the Dallas and Ft. Worth operas seem to be marketing male singers better than almost any other opera company. It's a great trend that I believe can be traced back the Three Tenors. Before that media onslaught, one rarely saw divos as part of ad campaigns. The Dallas Opera needs to be commended for one of the best and most original ad campaigns of the year. By the way, they've dubbed it "Lovers and Scoundrels." I guess someone in their marketing department really understands men.

You can contact this site at barihunks@gmail.com
at 5:49 AM