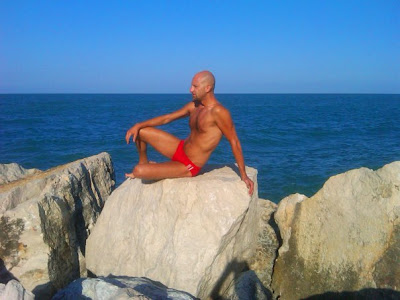 One doesn't think of Mustafa in Rossini's "L'Italiana in algeri" as a barihunk role. It's usually sung by a bariChunk well into his career and more known for his character acting than his abs and pecs. But when Italian barihunk Luca Dall'Amico is cast in the role one can't blame the director for asking him to sing the role shirtless. The only complication might be that Isabella might decide to stay with Mustafa rather than boarding the ship back home.

And who would blame her?

32-year old Luca Dall’Amico was born in Vicenza, Italy and made his operatic début in 2003 at the Verona Arena. His career has been primarily centered in Spain in Italy. He can next be seen on March 10 in Verona perfoming in Gounod's "Romeo et Juliette."