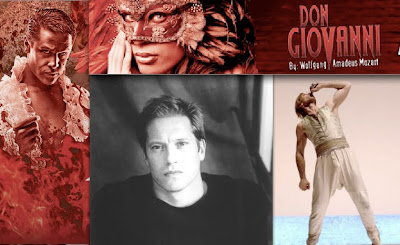 In March 2009, Barihunks asked readers to pick the world's sexiest Don Giovanni. We had an incredibly hot group of contestants that included Christopher Maltman, Mariusz Kwiecien, Randal Turner, Simon Keenlyside, Cesare Siepi, Ildebrando d'Arcangelo, Daniel Okulitch, Martin Achrainer and Mark Stone. Not only are all of these men incredibly hot, but they are all pretty amazing singers who perform Mozart's classic as well as anyone on the stage today.

Our readers are a pretty sophisticated bunch and in the end American Randal Turner beat out two other barihunks who also play the role with physically erotic gusto, Simon Keenlyside and Mariusz Kwiecien. Turner has gone on to be a regular on this site and we've bemoaned the fact that despite his American roots, his career has been centered in Europe. To our shear delight, the Michigan Opera Theater has hired Randal Turner to replace fellow barihunk Paulo Szot, who withdrew from the production. It's difficult from their website to figure out what nights he's singing, as he's alternating performances with Robert Gierlach. However, we've confirmed that Turner is performing on April 14th & 17th.

Here is a YouTube clip of Randal Turner singing a beautifully nuanced performance of "Deh, vieni, alla finestra." If you're anywhere near Michigan, we suggest that you click HERE and buy your tickets today. This is a U.S. debut that shouldn't be missed!