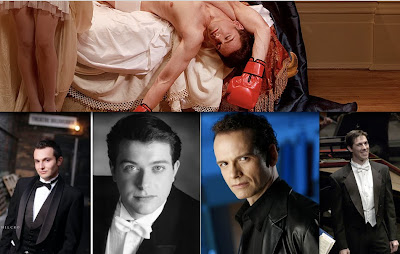 Toronto's Opera Atelier is known for cutting edge baroque performances, sexy marketing and even sexier singers. The boutique opera company's latest offering is Mozart's "Marriage of Figaro" with four certifiable barihunks, Phillip Addis, Curtis Sullivan, Olivier Laquerre and Vasil Garvanliev. All of them have appeared on this site before except for the youngest of three, Garvanliev. The Macedonian singer now resides in Toronto where he is wrapping up his graduate studies at the University of Toronto.

Garvanliev has been a child star in native country since the age of seven singing pop songs. He was a finalist in the Macedonian Eurosong Festival with his own original composition in February 2007. Here is a video of him from Macedonian TV:

The "Marriage of Figaro will run from April 24-May 1. Visit the Opera Atelier's wonderful website for more information.