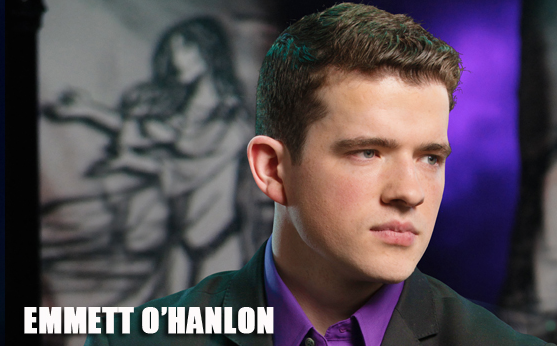 We have mentioned Irish-American barihunk Emmett O’Hanlon twice on our blog, but have never featured him individually.  The New York native is going to be touring with the popular all-guy group Celtic Thunder. First up is his solo show on the Celtic Thunder Cruise, which sails from Miami on Nov 8th-12th stopping at Nassau in the Bahamas and at the secluded private island of Thunder Bay. He'll be performing songs from Frank Sinatra and Ray Charles, as well as performing arrangements of Melody Gardot, Michael Buble and Zac Brown Band.

O'Hanlon is classically trained and received his Bachelors Degree in Voice from the College-Conservatory of Music at the University of Cincinnati, where he also performed as a soloist with the Cincinnati Symphony Orchestra. He continued on to Julliard, where he is currently completing a Masters Degree in Voice. Last season, he performed in both productions in  Julliard Opera’s double bill of Britten’s Curlew River and Vaughan Williams’ Riders to the Sea, as well as in this season’s Metropolitan Opera workshop production of The Sorrows of Frederick. At present, he is preparing for the role of Onegin in Tchaikovsky’s Eugene Onegin. He was also in the Bel Canto Young Artist Mentoring Program at Caramoor.

Emmett first met Celtic Thunder producer Sharon Browne in New York City, where she invited him to audition for the show.
The Very Best of Celtic Thunder Tour” kicks off in Orlando, Florida in February 2015 and features an eclectic collection of the group’s best-loved and most popular songs. The tour will take them throughout the U.S. and Canada. Check their website for a concert near you.
at 6:50 PM