Even though three of the four male finalists were baritones, the top prize for a male singer at the 7th Annual Mirjam Helin International Singing Competition was awarded to tenor Beomjin Kim, who we commend for his stellar performances. However, the €3 000 prize for the best performance by a non-Finnish singer of a Finnish song went to Croatian baritone Matija Meić. Meić placed second behind Kim, followed by fellow Croatian Leon Kosavic and Ukranian Dmytro Kalmuchyn. 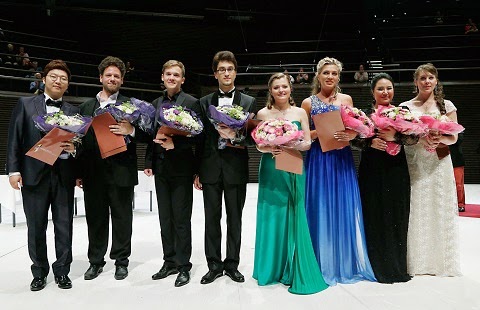 A total of €133 000 was awarded in prizes and the laureates receive invitations to perform in Finland and abroad. The members of the Jury voted independently and did not discuss the performances during the voting procedure. In adjudicating the Final performances from all three rounds were taken into account.

Forty-six singers from around the globe took part in the Competition this year, with the jury selecting 19 for the semi-finals and eight for the final round. The chairman of the 2014 Jury was the Artistic Director of the Savonlinna Opera Festival, Jorma Silvasti. Other jurists included Franz Grundheber, Maria Guleghina, Ben Heppner, Robert Holl, Andrea Rost, Nathalie Stutzmann and Deborah Voigt.

The prize winners will perform at a concert on August 15th at Tampere Hall accompanied by the Tampere Philharmonic under the baton of Hannu Lintu.