Our latest reader submission came from a baritone colleague, who sang with him in Austria and Italy. Meet Salerno native Ernesto Petti, who recently switched fachs from tenor to baritone.

Petti who once wanted to be a professional water polo player, shared the stage with Diana Damrau and Piotr Beczala in the controversial performance of Verdi's La traviata last year at La Scala (that prompted Beczala to exclaim that he'd never sing there again). The production was broadcast, allowing Petti to draw an unusual amount of positive attention in a small role, as he was decked out in sexy, white muscle tee shirt [see photo]. 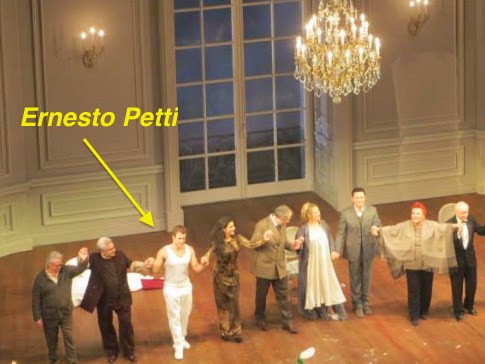 Petti began his vocal studies in Naples when he was just 18 years old. In 2010, he graduated from the Academy of Torre del Lago Puccini, where he studied with acclaimed tenor Marco Berti.
He won first prize at the Francesco Albanese di Napoli competition and won the second prize at the "Ravello Città della Musica" competition.

He made his professional debut in 2009 as Eagro in the Johann Christian Bach edition of Gluck's Orfeo ed Euridice at the Festival Valle d'Itria. He followed that up with a performance in Viardot's Cendrillon. In 2011, he returned to the Festival to sing The Officer in Ernst Krenek's tragic one-act opera Der Diktator, for which he received critical acclaim.

He appeared in Puccini's hometown of Torre del Lago as Harry in the composer's La Fanciulla del West, which celebrated the centenary of his opera about the American West.

He has also sang in Bizet's Carmen at the San Carlo in Naples, Verdi's Macbeth at the Teatro Coccia in Novara, Verdi's Simon Boccanegra at the Teatro Municipale di Piacenza and Modena.
at 4:40 PM