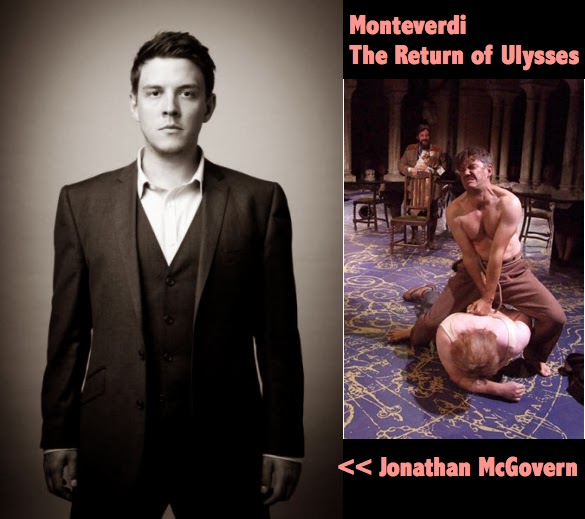 We somehow lost track of Jonathan McGovern after his critically-acclaimed performances as the avatar Jake in Nico Muhly's Two Boys at the English National Opera in 2011. At the time, he had just taken 2nd Prize at the 2011 Kathleen Ferrier Awards and was joining the Britten-Pears Young Artist Programme.

He recently caught our attention again as Ulysses at the Iford Opera Festival production of Monteverdi's The Return of Ulysses. Rian Evan said his "burnished baritone embraces both the heroism of Ulysses and the emotional torture of this culminating episode of his odyssey." It's amazing to think that this is the same guy who played the baby faced boy n Two Boys. He next takes on Sid in Puccini's La fanciulla del West at ENO in October and then sings the role of the captain in Tchaikovsky's Eugene Onegin at Grand Théâtre de Genève with fellow barihunk Michael Nagy as Onegin.


Behind the scenes with Jonathan McGovern and Louise Alder:


Other engagements this season have included Polynices in Julian Anderson’s world premiere The Thebans at ENO, the role of Adam in a staged version of Haydn’s The Creation for Vocal Futures at the Ambika P3 in London, the St John Passion with Winchester Music Club, and a recording of Marc-Antoine Charpentier’s Le Reniement de Saint Pierre where he sang the role of Jesus.