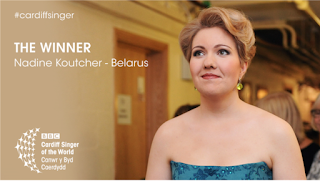 The Top Prize went to soprano Nadine Koutcher of Belarus. For the finals she performed, "Ach, ich liebte" from Die Entführung aus dem Serail, Marfa's aria from The Tsar's Bride and Lakmè's Bell Song.
at 2:12 PM