The ever innovative West Edge Opera in Berkeley, California is about to launch their summer season and all three operas feature barihunks. The season will also be performed in three unique settings around the East Bay.

Laura Kaminsky's As One will feature popular barihunk Dan Kempson opposite soprano Brenda Patterson. The piece be performed at The Oakland Metro, a punk rock venue reflective of Oakland’s gritty art scene and the ideal space for such a provocative piece.

As One premiered at The Brooklyn Academy of Music just this past September with the husband and wife team of Kelly Markgraf and Sasha Cooke. Kaminsky was inspired to write the opera after reading an article in the New York Times in 2008 about a New Jersey marriage in which one of the parties transitioned from male to female, transforming the couple from straight to gay.
The opera is based on the life experience of noted filmmaker Kimberly Reed.

Two singers, a baritone and a mezzo-soprano, together portray the character Hannah.  The two singers embody a young boy who knows he is different but can't understand how or why. The 70-minute opera traces the life of young Hannah through her eventual gender reassignment.  Performances are on July 26 and 31, and August 8th. 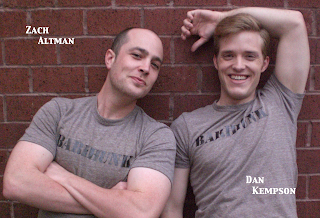 Alban Berg’s Lulu will be performed in the abandoned and decaying 1912 Beaux-Arts train station at 16th Street in Oakland where the movies Funny Lady and RENT were filmed. The Oakland 16th Street Station (also known as the Oakland Central Station) was for decades Oakland's main train station. It is now being revived as a space for arts and events. In a bit of luxury casting, barihunk Zachary Altman, who is making a name for himself in Basel, will perform the role of the Athlete. He also happens to be Dan Kempson's husband. Performances are on July 25, and August 2 and 8.

The final opera is Monteverdi’s, Ulysses, which will be staged at the American Steel Studios, a former pipe factory turned six acre art studio that’s now home to steel fabricators, sculptors, vertical aerial and trapeze performers, glass artists, and more. The opera stars Nikolas Nackley in the title role and performances are on August 1, 7 and 9.

Tickets and additional cast information is available online.
at 4:30 PM