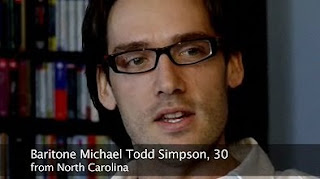 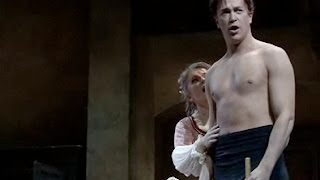 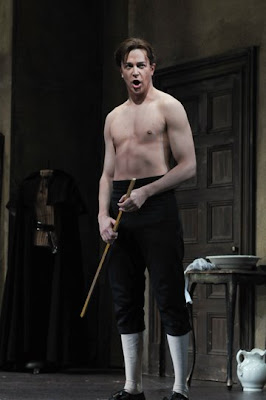 [Top two photos are screencaps from the Dallas Morning News video; The large photo of Daniel Okulitch is courtesy of Karen Almond, the official photographer for the Dallas Opera]

Do you remember the song "Rock Me Amadeus" with the lyrics?:

He was Superstar
He was popular
He was so exalted
Because he had flair
He was a virtuose
Was a rock idol
And everyone shouted:
Come on and rock me Amadeus

Well, the Dallas Opera is rockin' some serious Amadeus with their production of Le Nozze di Figaro. We've already posted about the production, but now we have photos of Daniel Okulitch shirtless and not "almost shirtless." Also, there's a nice screencap of cutie Michael Todd Simpson.

It's nice to see two barihunks burning up the stage together.

There are performances through November 22. Visit the website at www.dallasopera.org. If you're in the area, don't miss this performance.
at 8:29 PM