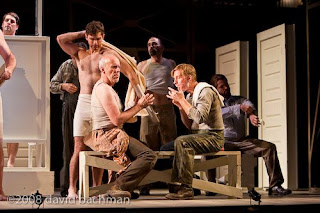 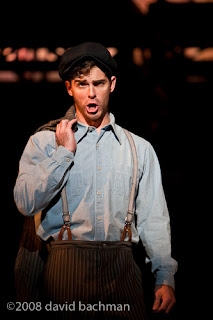 Here are some hot pictures of Craig Verm performing Tom Joad in Grapes of Wrath at the Pittsburgh Opera. It's nice to see the occasional shower scene in opera, especially when there are barihunks involved. I'm still waiting for an updated version of Billy Budd to the 1970s where all of the sailors are in short-shorts and no shirts. (Any German directors listening? Feel free to steal the idea).

Barihunks readers might remember Craig Verm as the guy who created a sensation playing Joseph Pitt in Peter Eötvös’ Angels in America at Fort Worth Opera. You can refresh your memory here: http://barihunks.blogspot.com/search?q=craig+verm. He shared the stage with the equally hot David Adam Moore, who is featured in the previous post.

Verm, who performs regularly in Pittsburgh, is next scheduled to sing the beautiful Faure Requiem with the Pittsburgh Concert Chorale on March 7 & 8, 2009. You can get more information here: http://www.pghconcertchorale.org/.