Voting Ends Soon: Who is the hottest barihunk? 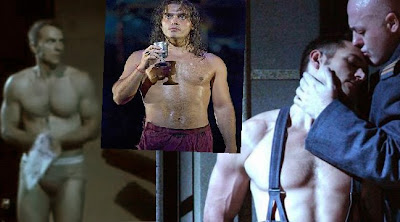 The voting is down to two Americans and one Uraguayan barihunk. Only five votes separate #3 from #1. The picture on the left is of David Adam Moore from Soldier Songs by David T. Little. The center photo is of Erwin Schrott heating up the stage as Don Giovanni. The picture on the right is of the heterosexual Nathan Gunn in a homoerotic moment from Billy Budd.

If anyone would like to see a future poll and has suggestions, please email them to barihunks@gmail.com. I have received two unsolicited suggestions already: Hottest Chest and Hunkiest Don Giovanni. I also received a number of emails excoriating me for leaving off Mariusz Kwiecien and Daniel Okulitch. Maybe we'll have a showdown between those two very different looking barihunks.