David Adam Moore Strips Down to His Skivvies 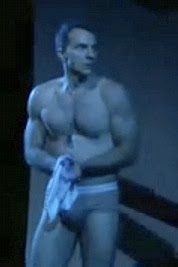 David Adam Moore is the future of opera. He's hot, he can sing, he can act and he's willing to take opera in new directions. If opera is going to survive into the 21st century, then people like DAM will be leading the way.

He just wrapped up a successful run as Zurga in the Pearl Fishers in Seattle and is now headed to Pittsburgh to sing Marcello in La Boheme. In late Spring, he'll be at La Scala singing a certifiable Barihunks opera, Britten's A Midsummer Night’s Dream in a Robert Carsen production. This ought to be a special night of theater.

Enough words, check out the video as one of the hottest barihunks in the world strips down to his underwear!