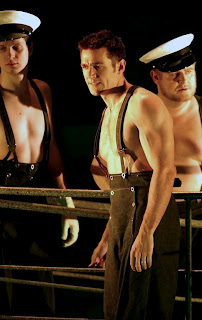 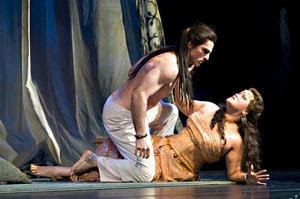 In an age with a plethora of barihunks, it only seems appropriate that our Hottest Barihunk poll came down to a tie. Nathan Gunn and David Adam Moore both received 23% of the vote in a seven person race. It was an impressive showing for David Adam "More More" Moore who is much less well known than Nathan Gunn. Moore is clearly emerging as the new generation of singers frequenting opera stages. He can sing, act and he looks like the characters he plays. He also is a singer who takes risks with his repertoire, many of which appeal to younger audiences. By the way, notice the tattoo on Moore's ankle. Very hot!

The phrase barihunk was practically coined for Nathan "Top" Gunn and it's difficult to find an article where his looks aren't a key part of the reporting. He has also shown an amazing ability to reach crossover audiences singing show tunes and other non-operatic music. His sexy portrayals of Billy Budd, Pearl Fishers, Magic Flute and even the Barber of Seville have become operatic legend.

The only other serious contender in this competition was Erwin "Hot" Schrott, who finished well back at 16%.

The success of this site is a testament to the fact that people want to see singers who look believable on stage. With that said, I'm glad that every barihunk in this poll is ALSO an amazing singer. I want to thank the readership of this site for making this site fun for me, agents, singers, marketing departments and fans of hunky baritones around the globe.