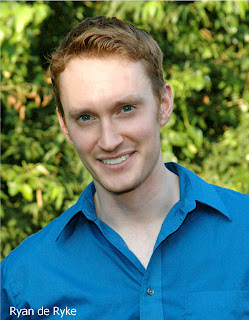 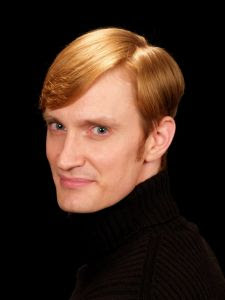 My apologies for the lack of posts over the last few days, but my internet service was down. After the Hottest Barihunk competition, I figured it's time to start looking at the barihunk bench. There are a number of major hunks emerging on the operatic scene and I want to shere them with you over the next week.

I recently received an email from someone who heard Ryan de Ryke in recital. They called him "tall, red-headed and someone you can't take your eyes off of." Well that got me googling pretty quick, so you be the judge.

De Ryke has appeared in a number of barihunks standards including Britten's Midsummer Night's Dream and our beloved Monteverdi and Mozart operas, which supply us with numerous barihunk images. He's rapidly establishing himself as an early music specialist and lieder recitalist of note, as witnessed from this beautiful clip of Schubert lieder.

De Ryke studied at the Britten-Pears Institute and his teachers have included Ian Partridge at the Royal Academy of Music and John Shirley-Quirk at the Peabody Conservatory.