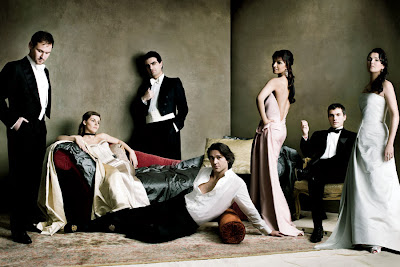 Opera is ready for its close-up, Mr. DeMille. Or, rather, Mr. Gelb, for Metropolitan Opera general manager Peter Gelb is responsible for bringing this high art to the silver screen. Since 2006, when the Met first broadcast live in high definition to selected movie theaters—now up to about 850 screens in 36 countries—audiences have been able to feel on intimate terms with world-class singers. “It’s like seeing somebody eye to eye,” says the Australian-born soprano Danielle de Niese, whose performance this past January in Gluck’s Orfeo ed Euridice was beamed out to far-flung aficionados. Given the new craze, it’s a pleasure to have artists who are as easy on the eye as on the ear. A clear leader is Russian soprano Anna Netrebko, whose vocal and physical charms will be staged and screened in the Met’s new production of Offenbach’s Les Contes d’Hoffmann in December, opposite Rolando Villazón, the dashing Mexican tenor. Offstage, her fiancé is the Uruguayan bass Erwin Schrott, who this winter was seducing audiences and maidens alike as Mozart’s Don Giovanni. Another leading man fond of the unbuttoned shirt is American baritone Nathan Gunn, who will be flexing his voice in the upcoming Met season as Papageno in Mozart’s Die Zauberflöte. Joining him in the lower registers, Polish baritone Mariusz Kwiecien will portray the toreador Escamillo in the Met’s new production of Carmen, opening on New Year’s Eve. He’ll be teamed later with Maija Kovalevska, the Latvian soprano, whose high cheekbones and shimmering voice in the role of Micaëla will no doubt cause swooning in cineplexes around the world. Popcorn and Bizet? Why not?