Anyone who has ever followed barihunk Michael Mayes on the Lone Star Opera site knows that he's one of the funniest men in opera. He recently joined his soprano/girlfriend Janna Williams and fellow baritone Craig Irvin in a bluegrass version of "Non piu andrai" loosely adapted from Mozart's Le Nozze di Figaro.

Here is the description of their video from YouTube:

Recently Craig Irvin and Michael Mayes had to cancel their appearance at the Des Moines Social Club, so the Ledbetter Fambly (Nugene, Raegene and Cleotis) ~ fresh from an appearance at Bluegrass Tuesdays on the Square in Indianola ~ stepped in and offered their rendition of Mozart's famous aria from Le Nozze di Figaro, "Non piu andrai." 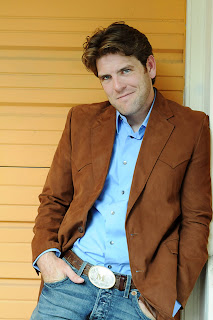 [Michael Mayes]
You can email us at barihunks@gmail.com.