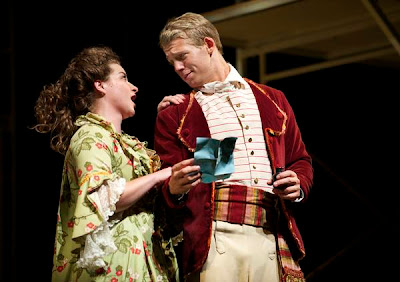 [Rosina (mezzo-soprano Elizabeth Jarrett) and Figaro (baritone David Krohn) plan her escape in the Aspen Opera Theater Center's new production of "The Barber of Seville." - Photo byAlex Irvin]
We might as well keep the trilogy theme going, as the Aspen Music Festival is presenting the Beaumarchais Trilogy from July 31 through August 21. The trilogy's links are Count Almaviva and Rosina who we encounter in Rossini's "Barber of Seville," Mozart's "Le Nozze di Figaro," and John Corigliano's modern masterpiece "The Ghosts of Versailles."
Pierre-Augustin Caron de Beaumarchais was a French watchmaker, spy, revolutionary, diplomat, gun smuggler and author. His Figaro plays Le Barbier de Seville, Le Mariage de Figaro and La Mère coupbale have provided inspiration for two classics of the standard repertoire and a modern work that seems destined to stay around.
Beaumarchais was known to show sympathy to the lower classes. Figaro's character is portrayed as more wily than his aristocratic and better-educated counterparts and his plays are filled with mockery of society's "nobler" class. The character of Figaro is still revered in France and throughout the world as a symbol of the common man standing up to the priveleged class.
It is extremely rare to have the opportunity to see the Beaumarchais Trilogy performed in one place, so the undertaking by the Aspen Music Festival is particularly notable. Barihunks fans will be thrilled to learn that David Krohn will perform Figaro in the Barber of Seville. Unfortunately, we don't know who is cast is in any of the other roles since the Festival doesn't post cast lists, which we find highly insulting to young singers. We rarely criticize anyone on this site, but posting the names of conductors and directors, but not singers is inexcusable.


You can email us at barihunks@gmail.com
Subscribe to Barihunks by Email
at 7:14 AM