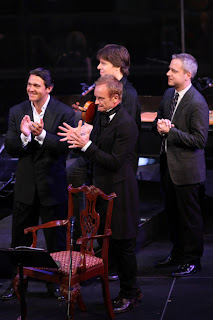 (Sting, Joshua Bell, Nathan Gunn and Jeremy Denk attend the special performance of "Twin Spirits" at Frederick P. Rose Hall, Jazz at Lincoln Center on June 30, 2010 in New York City. June 29 - Photo by Neilson Barnard/Getty Images North America)
★ Met in the Parks (NY Times) The Met is no longer presenting concert performances of complete operas with its orchestra in New York parks, but the company’s alternative, a free recital series, is catching on. This Monday the baritone Nathan Gunn, the soprano Susanna Phillips and the tenor Michael Fabiano present a recital program at Central Park’s SummerStage.