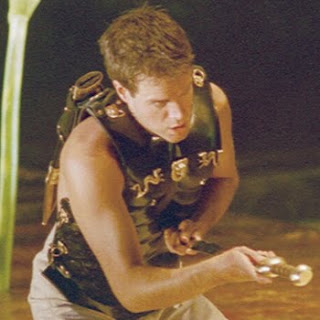 Fans of Teddy Tahu Rhodes who were planning on seeing him perform as Zurga in the Pearl Fishers at the State Opera of South Australia need not be disappointed. The opera company is replacing the popular barihunk with Grant Doyle, another certifiable barihunk, who has previously appeared on this site.

The announcement of the switch was a little odd, as it gave the canned excuse of a "last minute indisposition," but the performances aren't until September 2010. Also in the production will be Pelham Andrews, who is performing Nourabad. Andrews has been on our list of emerging barihunks for almost two years, so this seems like an appropriate time to add him to the roster.

Andrews in a native of Australia and a graduate of Adelaide University and the Cardiff International Academy of Voice. He was part of the Young Artist Program at the State Opera of South Australia and the winner of the McDonalds Operatic Aria competition in 2005.

Grant Doyle is also scheduled to sing the role of Starbuck in Jake Heggie's new opera "Moby-Dick" at the State Opera of South Australia in Adelaide in September 2011. Moby-Dick recently created a sensation among audiences and critics when it premiered this summer in Dallas.