Opera Atelier, who we feel produces some of the most visually stunning opera in the world, is at it again with their revival of Mozart's Abduction from the Seraglio. The production stars barihunk Curtis Sullivan, who is a regular with the company and appeared in the original production.

We don't know about you, but if the Pasha Selim looked like Curtis Sullivan, we're not sure why Konstanze would want to be rescued. We also may have run off with the Pedrillo, who in this production is Adam Fisher, who we must confess could distract us from the low voices. 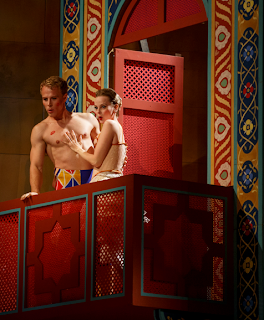 The opera also featurees Lawrence Wiliford as Belmonte, Ambur Braid as Konstanze, Carla Huhtanen as Blonde, hunkentenor Adam Fisher as Pedrillo and Gustav Andreassen as Osmin. Also featured are the Atelier Ballet and the Tafelmusik Baroque Orchestra under the baton of David Fallis. There are three performances remaining on October 30 and November 1 and 2.

Also appearing with Opera Atelier this season will be Vasil Garvanliev, who appears as our September feature in the 2014 Barihunks Charity Calendar. He'll be performing Divinité Infernale in Lully’s Persée, which will run from April 26 – May 3, 2014. You can order your calendar and help out young artists by clicking HERE. If you have suggestions for who should receive a charity donation post it on our Facebook timeline or Tweet #Barihunks2014. We will announce our first grantee later this week.
at 11:09 AM