Shirtless photos of Wes Mason in The Tragedy of Carmen

After receiving these shirtless photos of Wes Mason as Escamillo in Peter Brook’s adaptation of “The Tragedy of Carmen” at the Syracues Opera, we thought it was worthwhile to follow up with another post.

Peter Brook abridged Bizet’s famous opera to a theater piece that runs a little over 80 minutes and focuses the action entirely on the scenes involving the four principals: Carmen, Don José, Micaëla and Escamillo. He eliminated the chorus and had the French composer Marius Constant reduce Bizet’s symphony orchestra to a chamber orchestra of 15 players. For the spoken dialogues in his adaptation, Brook drew more closely upon Prosper Merimée’s original story than Bizet’s libretto.

There are performances remaining on October 13, 15 and 18 at the Carrier Theater of the Mulroy Civic Center in downtown Syracuse, New York.

If you can't catch Wes Mason in Syracuse, you'll have two chances to catch him in one of the sexiest roles in opera, Zurga in Les pêcheurs de perles (The Pearl Fishers). First up will be at the Baltimore Concert Opera from February 28 to March 2, and then from March 7-9 at the Delaware Opera. 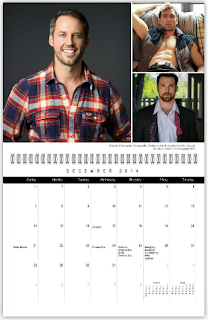 You can enjoy Wes Mason in your own copy of the 2014 Barihunks Charity Calendar. He's joined in December by Christopher Temporelli and Christiaan Smith-Kotlarek in our special three singer spread to warm up your holiday season. Click HERE to order your own copy or as a special gift to the opera lover in your life (or hunky guy lover).
at 6:45 PM