First of all, we want to congratulate Matt Worth on his recent wedding and wish him and his bride a lifetime of happiness.

We also wanted to share with our readers this video of him singing Robert Schumann's most famous song cycle, Dichterliebe, Op. 48, at this year's Santa Fe Chamber Music Festival. He is joined by accompanist Shai Wosner.

The whole closely integrated song cycle traces an inner narrative, from the initial awakening of love, through rapture, disillusion and despair to tender regret and a final bittersweet, ironic acceptance. Heinrich Heine’s verses are a distillation of the poet’s ultimately doomed love for two of his cousins in Hamburg. For Schumann real life was to provide a happier outcome. Dichterliebe can be heard as his most piercing recreation of the fluctuating, often anguished, emotions he had experienced during his long courtship of Clara Wieck (Schumann).


If you want to see Matt Worth live, make sure to make travel plans to Washington D.C. Worth will star as Starbuck in the highly anticipated East Coast premiere of Jake Heggie's epic Moby-Dick at the Kennedy Center with the Washington National Opera from February 22 - March 8, 2014. Queequeg by fellow barihunk Eric Greene. Tickets go on sale December 4, 2013 to the public and on November 25, 2013 to Kennedy Center members. 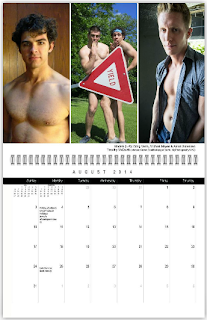 Who gets the money for the 2014 Charity Calendar?

Most LIKES on Facebook and most retweets on Twitter will increase your odds of winning.  (Use #Barihunks2014). Post your comments to our Facebook feed with who you should think is deserving of the a charitable contribution and why.
at 9:30 AM