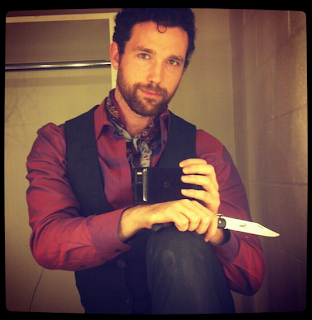 We've been huge fans of Wes Mason since his breakout performance in Jorge Martín's Before Night Falls in 2010 at the Fort Worth Opera Festival.

He's currently appearing with the Syracuse Opera in their production of the Peter Brooks/Georges Bizet arrangement of The Tragedy of Carmen portraying Escamillo. We've known Wes Mason for three years now and we've learned that he can dominate both a room and a performance. So it was no surprise to us that both the local paper and the artistic director of the Syracuse Opera focused on this rising star. The headline screamed, "Bullfighters, Barihunks, and Bravado."

“There’s this thing in the opera world,” artistic director Douglas Kinney Frost told the Syracuse New Times. “Now, it’s more like a movement, but there’s this blog where they choose ‘barihunks.’ The idea is that he’s a sexy hunk of a guy and he’s a baritone. I’m very proud to have Escamillo as a barihunk. [Wes Mason] loves it. He’s very flattered. And he’s one of the originals.”

Performances run from October 11-20 and tickets are available online.

If you can't catch Wes Mason in Syracuse, you'll have two chances to catch him in one of the sexiest roles in opera, Zurga in Les pêcheurs de perles (The Pearl Fishers). First up will be at the Baltimore Concert Opera from February 28 to March 2, and then from March 7-9 at the Delaware Opera.

You can enjoy Wes Mason in your own copy of the 2014 Barihunks Charity Calendar. He's joined in December by Christopher Temporelli and Christiaan Smith-Kotlarek in our special three singer spread to warm up your holiday season. Click HERE to order your own copy or as a special gift to the opera lover in your life (or hunky guy lover).
at 7:00 PM