Barihunk Gregory Jebaily, who we introduced to readers in April and June with sexy shirtless photos, will be singing the role of Manfredo in Italo Montemezzi's L'amore dei tre re ("The Love of the Three Kings") with the Queen City Chamber Opera in Cincinnati.

L'amore dei tre re is a verismo rarity composed in 1913 by Italo Montemezzi, composed with a mix of Italian lyricism, Wagnerian lushness and Debussian languor. The opera was popular during the first half of the 20th century but has rarely been performed since.

Listen to an entire performance of The Love of the Three Kings from 1962:


The plot may have contributed a bit to its relative obscurity: Archibaldo, an old blind king, menacingly guards his daughter-in-law, Fiora, against the advances of her lover, Avito, a vanquished prince. Three characters die before the unhappy ending.


The performances with Queen City Chamber Opera will be on November 2nd and 3rd and are a part of National Opera Week in Cincinnati. Tickets are only $18/$26 and are available online. You can listen to sound clip of Jebaily on his new website. 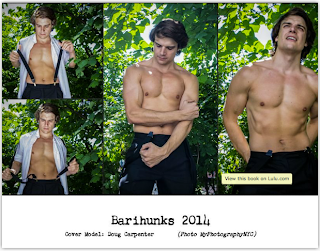 Who gets the money for the Charity Calendar?

Most LIKES on Facebook and most retweets on Twitter will increase your odds of winning.  (Use #Barihunks2014). Post your comments to our Facebook feed with who you should think is deserving of the a charitable contribution and why.
at 12:48 PM