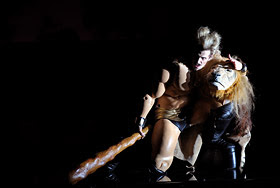 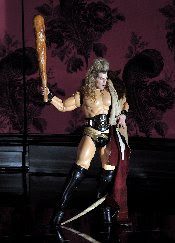 There is something about the story of Ercole (Hercules) that just seems like it was made for Barihunks. Unfortunately, Vivaldi's version, Ercole su'l Termodonte, was written for a tenor. The performances from Italy are already legendary because of hunkentenor Zachary Stains protracted periods of full-frontal nudity. (It's on video). We have no objection to hunky Zachary, but there are just so many more barihunks who could do this role justice!

Now the Netherlands Opera has produced Cavalli's version, Ercole amante, and it looks like a riot. It may be the one production that I regret missing this year and I hope that Cavalli's version joins the Vivaldi version on DVD. Don't miss the teaser video that I posted, as it is quite entertaining.

I had never personally imagined mythical Hercules as a WWF Wrestler-cum-Caveman but damn if Dutch National Opera's staging of Francesco Cavalli's Ercole Amante didn't almost persuade me it could be so.

Maybe Jake Heggie and Terence McNally can team up for a modern version of Hercules. Then again, Heggie is working on an opera called "Moby Dick," which depending on the subject matter could be a lot more interesting. If it's not about the whale, Barihunks suggests casting Mariusz "The Hot Pole" Kwiecien. See our
"Guess the crotch" feature: http://barihunks.blogspot.com/2008/05/guess-crotch.html