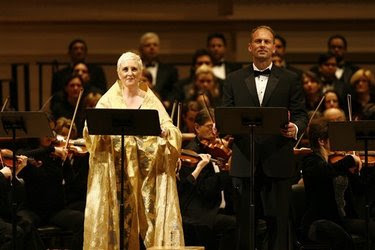 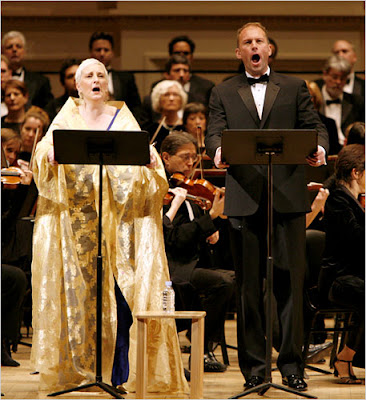 New York has been a crazy place of late: planes landing in rivers, fights over who will replace Hillary Clinton, Wall Street shenanigans, Bernie Madoff, Broadway shows shutting down and tax payers tossing out subsidies to the New York Yankees.

Amazingly, the most stable news this week came from the New York City Opera, which has been plagued with problems ever since construction began at Lincoln Center. If you want to read about it, visit La Cieca at www.parterre.com. So it was fascinating that the best news out of New York this week emanated from the "people's opera." They hired Dallas Opera's highly talented George Steel after only three months on the job. Then they scored a major success with only the third major revival of Samuel Barber's luscious Antony and Cleopatra.

Carnegie Hall was full of Barihunks fans to see Teddy Tahu Rhodes melt hearts as Cleopatra's lover. My favorite email this morning was from DCHU, who wrote:

"When Teddy walked out on stage - all 6' 5" of kiwi pulchritude - my heart stopped. A man hasn't looked this hot in a tux since James Bond. I kept thinking, 'Why do they keep singing about Romans, when all I'm thinking about are Trojans.'"

Teddy Bare fans will be thrilled to learn that he's scheduled to sing two certifiable barihunk roles in 2009: Escamillo in Bilbao next month and his signature hunk role Stanley in Streetcar Named Desire in Sydney this December.

By the way, for all of you who keep writing to me complaining that we never mention voices, this site really isn't about singing as much as it is about hunkiness. However, both the AP and the NY Times reported that Teddy Tahu Rhodes sang well. There are some amazing singers who are also barihunks and Teddy Bare is one (check out Vagabond and the DVD of Peter Grimes). If you're looking for great singing from a barihunk, I would recommend Christopher Maltman's recital disc from Wigmore Hall and Hanno Muller-Brachmann's new Schubert disc. I have been listening to both of these non-stop for the last few weeks. (There is a convenient Christopher Maltman Amazon widget to the right).