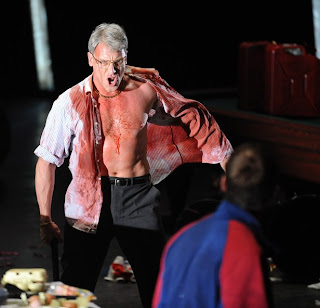 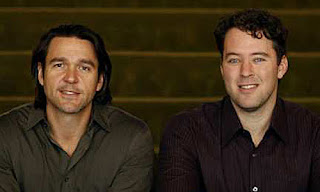 [Photo of Gunn and Kaiser from LA Times; photo of Gunther Groissboeck from http://www.guenther-groissboeck.com]

The LA Times has run a piece on the pretty boys performing in the Magic Flute at the LA Opera. Although they focus on Nathan Gunn and Joseph Kaiser, Barihunks readers will be thrilled to know that Gunther Groissboeck plays Sarastro and barihunk Markus Werba takes over for Gunn in four performances. Amazingly, the LA Times fails to mention both Werba and Groissboeck (who arguably is the hottest guy in the cast - see photo!).

It's nice to see how unapologetically Gunn relishes being a barihunk. Here's part of what he says:

Gunn has become an expert when it comes to visual distractions: “Every opera where there’s a love scene or where I am semi-dressed, like the bathing scene in ‘Billy Budd,’ there’s this attention about ‘Is Nathan Gunn getting naked again?’”

It all started with a 1997 production of Gluck’s “Iphigénie en Tauride” at Glimmerglass Opera in upstate New York. Gunn and tenor William Burden were told to hit the gym for the production envisioned by director Francesca Zambello. “It worked,” he says with a laugh. “The theater was selling out opera glasses.”

More important, as the New York Times noted of Gunn and Burden: “When they are thrown into the temple, bruised, stripped down to loincloths and chained together, they create a kind of intensity rare in the opera house. Their physicality might have been distracting had their singing not been so ardent and intelligent.”

If buzz about his shirtless scenes attracts newcomers, that’s fine, says Gunn, as long as they — as well as worried purists — realize that opera’s traditional reverence for the voice isn’t diminished just because “you make it believable for an audience by having characters who can sing and act and look the way they should.”

To buy tickets or to get more information, click here: www.laopera.com.