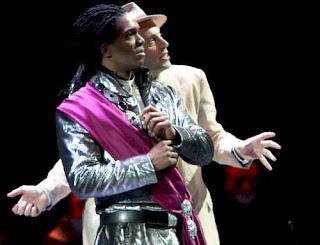 Nmon Ford opened in Louis Gruenberg's "Emperor Jones" last night in Ancona. There will be one more performance on Sunday. Click here for details:
http://www.teatrodellemuse.org/-2-inglese/BIGLIETTER/OPERA-SEAS/index.asp

The opera was a huge success at The Met in 1933 and baritone Lawrence Tibbett received 37 curtain calls. I believe that this is the first performance of the opera in Italy since 1952 in Rome. According to Italian news reports, Nmon Ford sang in "American black slang" and eliminated the N-word from the score. AGI News in Italy said that Ford was a "great protagonist."