He made his professional debut in 2001 as Germont at the Avignon Opera House with Patricia Cioffi in Verdi's La Traviata.  He subsequently appeared as Golaud in Debussy's Pelleas and Melisande at the Massy Opera house and Puccini's Madame Butterfly at the Marseilles Opera House. His performance in Richard Strauss' Salome at the Montpellier Opera House was recorded by Universal Music.
Earlier this year he appeared at l’Opéra de Marseille as Giocanto Castriconi in the premiere of Jean-Claude Petit's Colomba, about a Mediterranean heroine with an insatiable desire for vengeance. He's been a regular at Marseille singing Scarpia in Puccini's Tosca, the Duke of Verona in Roméo et Juliette and Monterone in Verdi's Rigoletto.

His career has been primarily centered in France. 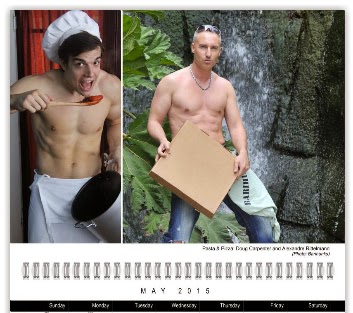 Have you ordered your 2015 Barihunks Charity Calendar yet? It features 19 of operas hottest stars, including Doug Carpenter and Richard Alexandre Rittelmann (shown above). Click below to order now.