Who says that we don't make dreams come true at Barihunks? Canadian barihunk Bevan Bühler posted the following on Twitter: "My life goal is to be listed on barihunks." We get a lot of requests for singers to appear on the site, but this one seemed like a no-brainer. In 2012, he one of eight finalists in the Discovered international model search, which raised funds for the Children's Wish Foundation.

After completing his Associate Degree in piano performance, Bühler began his journey as a singer when he was given the opportunity to play Rolf in Rodgers & Hammerstein's The Sound of Music in his hometown of Yorkton, Saskatchewan. Since then, Bühler has performed various solo and chamber recitals and has been featured at the Edmonton Vocal Arts Festival and the Saskatoon Music Festival.  Bühler has also joined the casts of Richard Strauss' Ariadne auf Naxos and Handel's Alcina with Opera Nuova and has performedin Mozart's Le Nozze di Figaro and Purcell's King Arthur with Saskatoon Opera. 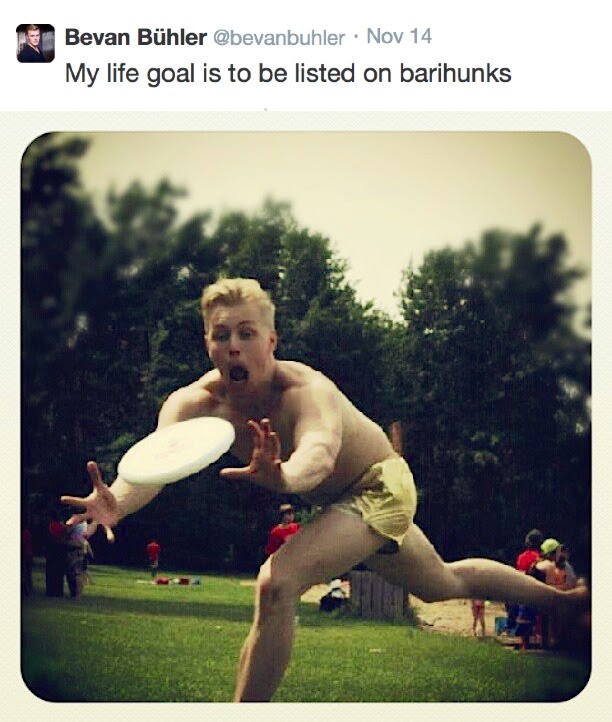 Bühler began his 2014-15 season by singing Ramiro in Maurice Ravel's comedic opera, L'heure Espagnole, presented by University of Western Ontario Opera (UWOpera). Under the direction of Michael Cavanagh, Bühler's character effortlessly was required to lift and carry large clocks on and off stage. To no one's surprise, he got the girl in the end.

Future engagements include the role of the villain, Caiaphas, in Jesus Christ Superstar with Musical Theatre Productions London, as well as performing as a featured soloist with the University of Western Ontario Opera's cast at the University's Opera Gala this spring.

Off stage, Bühler spends his free time outdoors - including replanting forests in British Columbia during the summer - or in the weight room where he is a certified personal trainer.

If you want to enjoy 19 more of the sexiest men in opera, make sure to order your 2015 Barihunks Charity Calendar today by clicking below.