Barihunks Aubrey Allicock and Evan Hughes are among 16 young musicians up for a $100,000 cash prize from Warner Music to be given annually to a promising musician between the age of 18 - 35. The Warner Music Prize was created to bolster rising musicians with notable talents or achievements.

This year's inaugural award will be presented to an artist presented by Carnegie Hall who has shown exemplary musicianship in their solo roles throughout the 2014-2015 concert season.

The winner will be announced in the Spring of 2015, after the candidates have been thoroughly evaluated by a juror panel comprised of accomplished classical musicians and key industry leaders. In addition to the cash prize, the winner of the 2015 Warner Music Prize will be showcased at the Warner Music Prize Gala on October 27, 2015 at Carnegie Hall. Money raised at the gala will benefit the Harmony Program and the Weill Music Institute, both of which aim to provide music education to underserved demographics.

Evan Hughes is on the roster of the Semperoper in Dresden, Germany. His roles this season include Zoroastro in Handel's Orlando and Achilla in Giulio Cesare, Don Basilio in Rossini's Barbiere di Siviglia, Pietro in Verdi's in Simon Boccanegra, Colline in Puccini's La bohème and Emma Becker in Peter Ronnefeld’s Nachtausgabe. 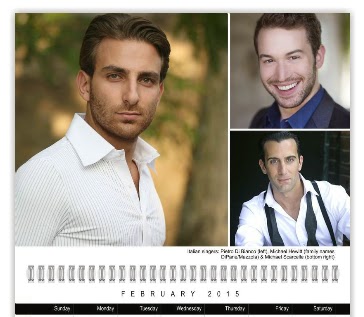 Don't forget to order your 2015 Barihunks Charity Calendar, so you can enjoy 19 of operas hottest men all year!