One of the most enjoyable opera productions that we've ever witnessed was Ned Canty's production of Menotti's The Last Savage at the Santa Fe Opera in 2011 featuring barihunk Daniel Okulitch. The comedic opera was premiered around the time of John F. Kennedy's assassination and the country was in no mood for light-hearted fare, rendering the opera to virtual obscurity.

There have been occasional revivals with big names singing the baritone lead of Abdul, including George London at the Met in 1964 and John Reardon at La Fenice later that year. Reardon reprised the role with the Hawaii Opera Theater a decade later, but the opera quickly disappeared from the repertory.

The story revolved around a young anthropology student named Kitty, who becomes quite enamored of a captured savage named Abdul and decides to keep him for herself.

The Santa Fe Opera production caused many people to reconsider its box office appeal, as it was the surprise hit of the Summer. Now Indiana University is reviving the production with two of their sexy barihunk students, who appear on stage for much of the opera in loin cloths. Robert Gerold will perform on November 14 and 21, while Eric Smedsrud takes on Abdul on November 15 and 20.

Eric Smedsrud is making his Indiana University opera debut as Abdul. The Minnesota native recently completed his undergraduate studies in Vocal Performance at Lawrence University Conservatory of Music in Appleton, Wis.  Recent roles include Frank Maurrant in Weill's Street Scene and Sam in Bernstein's Trouble in Tahiti at Lawrence University, as well as Herr Fluth in Nicolai's Die lustigen Weiber von Windsor with Lyric Opera Studio Weimar in Weimar, Germany. He is a first-year master’s student studying with Robert Harrison.

Robert Gerold is currently pursuing his Bachelor of Music in Voice Performance as a junior at the Jacobs School of Music. In April 2014, he premiered the dual roles of Retrograde/Asher in New Voices Opera's premiere of Eric Lindsay's Cosmic Ray and the Amazing Chris. Last summer, as part of the Oberlin in Italy Summer Program, Gerold performed the title role in Puccini's Gianni Schicchi. He is a student of Andreas Poulimenos. 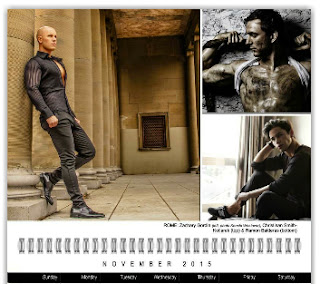 Have you bought your 2015 Barihunks Charity Calendar yet. Make sure to beat the holiday rush and order yours today by clicking below. It includes 19 of the hottest men in opera.