American barihunk Benjamin Werth, who has made his career in Europe in recent years, is making his debut with the opera at Theater Aachen in Leonard Bernstein's West Side Story. Werth is singing Riff, the gang leader of the Jets who suggests the rumble with the Sharks.

Since 2009, Werth has been part of the ensemble of the Landestheater Coburg where he sang Orest in Gluck's Iphigenie auf Tauris, Malatesta in Donizetti's Don Pasquale, Renato in Verdi's Un ballo in Maschera, Figaro in Rossini's Barber of Seville, Zurga in Bizet's The Pearl Fishers and the title role in Tchaikovsky's Eugene Onegin. This won't be his first foray into Broadway musicals, as he performed Sam in George Gershwin's Crazy for You in 2011.

An additional bonus in this production is the physical dancing of Jochen Kool, who portrays fellow Jets gang member A-Rab.

Performance begin on Friday, November 21st and run through the Spring of 2015. Tickets and additional cast information are available online. 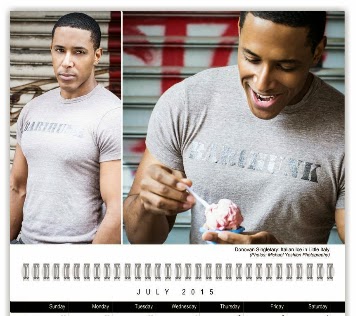 The 2015 Barihunks Charity Calendar is available in plenty of time for the holidays. Order yours today!