Barihunk Feast in Kentucky Opera's "Girl of the Golden West"

Forget about the "Girl" of the Golden West, "them thar hills" are filled with some hot guys! Puccini isn't exactly known for his great barihunk roles, although we do see the occasionally hot Scarpia, which makes us wonder if Tosca isn't choosing the wrong guy (who doesn't like a Bad Boy once in awhile?).

The one exception is his opera La fanciulla del West (The Girl of the Golden West), which features ten roles for baritone, bass-baritone or bass. Since they're all ambitious young miners, it's the perfect opera for some barihunk casting and the Kentucky Opera doesn't disappoint. Franco Pomponi is cast as Jack Rance, the main baritone role, and Joe Flaxman sings the appropriately named Handsome (a.k.a Bello). Both singers have appeared on this site. Add to that Michael Preacely as Sonora, Zach Owen as Ashby, Jeffrey Gates as Happy and Brent Michael Smith as Jim Larkens and you have a feast of low voices.

We're not quite sure how Brent Michael Smith has escape the eyes of our barihunk scouts, but we're more that pleased to add him to the bass-barihunk family.

Smith is a recent graduate of the University of Northern Iowa and a Studio Artist at the Kentucky Opera. He was an Apprentice Artist at the Central City Opera this year where he sang Antonio in Mozart's Le nozze di Figaro and covered Captain Von Trapp in The Sound of Music. In 2012, Smith  took the top prize at both the Grand Rapids Opera Competition and the National Association of Teachers of Singing Competition: Great Lakes Region. In addition to Jim Larkens, he will perform the roles of the Marquis/Doctor in Verdi's La Traviata and Harry Hopkins in Daron Hagen’s A Woman in Morocco.

Flaxman is also a Studio Artist with the Kentucky Opera this season. He will perform Teddy Forsythe in A Woman in Morocco and the Baron in La Traviata.

You can read an interview with Zach Owen HERE.

Performances of La fanciulla del West are on November 14 and 16. For additional cast information and tickets, visit their website. 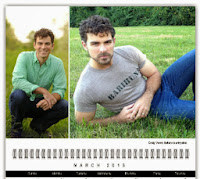 If you want to enjoy 19 more barihunks, make sure to buy our new 2015 Barihunks Charity Calendar. It's available by clicking on the LULU button below and every penny goes to support young artists.