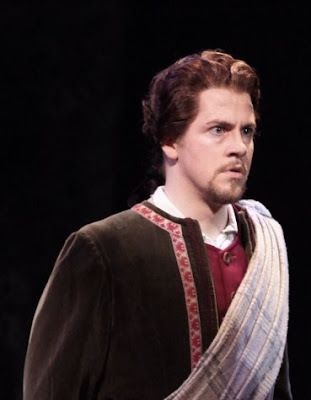 Christopher Bolduc must be a nice guy, as his colleagues at the Philadelphia Academy of Vocal Arts are always eager to apprise us of his latest conquests. Here is a video and photo of the young barihunk performing Enrico in Donizetti's "Lucia di Lammermoor." Bolduc is definitely one of the new group of singers who look as good as they sound. This video shows his enormous potential.

As usual, Ft. Worth Opera wasted no time is scooping up yet another barihunk, as he's scheduled to sing Belcore in L'Elisir d'Amore in the Texas city in the near future. He will also be performong Schaunard in La Boheme at the Palm Beach Opera. Rumor has it that he's also working on Marcello in the same opera for an unveiling in the not too distant future.

We're hoping for some more barihunk roles like Zurga or Tarquinius. Any impressarios out there casting those roles?