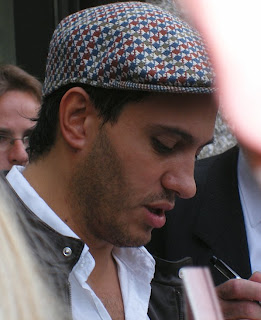 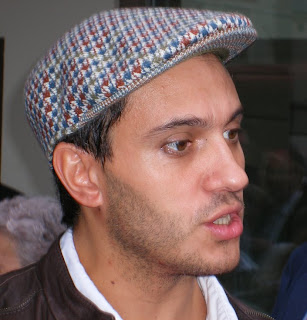 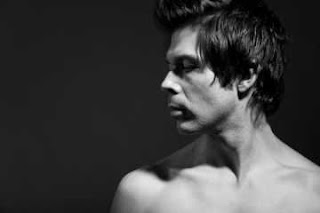 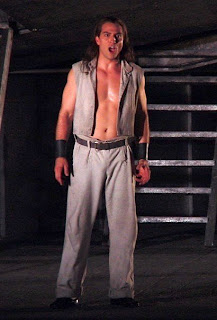 Some of our best pictures come from our readers. Your submissions are always appreciated and encouraged, because they make the site much more interesting. This week, a number of pictures were submitted that we want to share with you.

Here are two pictures of Erwin Schrott taken at the stage door in Salzburg by a fan. In one of them you can see a glimpse of his chest hair. Sexy! It's amazing how hot this guy can look after a performance. Ms. Nebrebko is one lucky woman.

Schrott's next performances are in Bari, Italy in Elixir of Love, then he's off to Vienna to portray his most famed role, Don Giovanni.

The black and white photo was discovered by a reader on www.theater.ch and it shows Michael Leibundgut in a sensuous pose that almost looks like a men's fragrance ad in Vanity Fair.

The bottom photo was sent to us by a fellow barihunk (asking for anonymity), but alerting us to this smoking hot picture of David Adam Moore in Billy Budd at the New Israeli Opera.

On June 6th, Moore opens in A Midsummer Night's Dream at La Scala, in what may be one of the Top 10 operatic experiences in the world this year. The production is staged by Robert Carsen with choreography by Matthew Bourne. That alone would make this production worth it, but the dream cast includes David Daniels as Oberon, barihunk Daniel Okulitch as Theseus, Moore as Demetrius, the stunning Rosemary Joshua as Tytanie, Erin Wall as Helena and Matthew Rose as Bottom. You can find a picture of Matthew Rose in Midsummer from Glyndebourne at http://www.askonasholt.co.uk/green/green/home.nsf/0/BE1C7C604F90E47F8025742B00579C7D?OpenDocument. For more information visit: http://www.teatroallascala.org/en/stagioni/2008_2009/opera-e-balletto/a_midsummer_night_s_dream.html